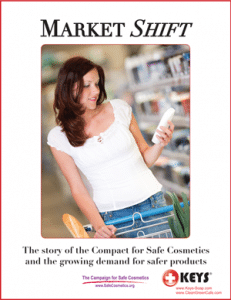 The  Campaign for Safe Cosmetics announced today that Keys has achieved the highest recognition earning “Champion” status by meeting the goals of the Compact for Safe Cosmetics, the Campaign’s voluntary pledge to avoid chemicals banned by health agencies outside the U.S. and to fully disclose product ingredients – a pioneering practice in the cosmetics industry.

“Congratulations to Keys for being a ‘Champion’ and for demonstrating that it’s possible to make personal care products that far exceed current safety standards in the United States. A growing number of consumers are seeking personal care products that do not contain hazardous chemicals, and our report shows that making safer products is not only possible, but is also part of a successful business model,” said Mia Davis, organizing director of the Campaign for Safe Cosmetics and coordinator of the new Safe Cosmetics Business Network.

The new report released today, “Market Shift: The story of the Compact for Safe Cosmetics and the growth in demand for safe cosmetics,” describes the seven-year project during which the nonprofit organizations that make up the Campaign worked with companies in a unique partnership to raise the bar for safer personal care products.  A copy of this report can be downloaded by Clicking Here

More than 1,500 companies signed the Compact from its inception in 2004 until August 2011, when the Campaign for Safe Cosmetics closed the Compact project. The research team at Environmental Working Group’s Skin Deep database developed tools for tracking each company’s compliance with the goals of the Compact. Through these tools, the Campaign determined that Keys earned Champion status.

Wendy Steele, Keys CEO told the press,  “It is wonderful to be recognized for achieving Champion status.  It has been bestowed after very hard work by Keys and the other Compact signers.  Normally honors come to companies who achieve sales goals, a marketing presence or who achieve some notoriety in a major industry.  Our champion status comes from surviving a long war doing battle as contrarian’s in an industry of stodgy warlords.  The personal care industry is controlled by a few market leaders and their lobbying prowess.  We have not won, but their walls are crumbling.”

Steele added, “As a former Coca-Cola executive, I knew as the CEO of a small company that we had to appeal to the retailers who understand that clean natural products help people and to consumers who are tired of using chemical-laden products that we believe cause over 50% of skin ailments.  These retailers and consumers are the true champions and have sent clear messages to the “good ‘ole boys” that consumers are now voting with their hard-earned dollars buying products that are natural, solve their problems and make them feel safe.”

Wendy recalled that when Keys started , it was a tiny company on a mission.  The Compact for Safe Cosmetics gave us the collective voice to be heard.  The EWG Skin Deep database validated our efforts.  We are no longer a tiny company growing over 400% since signing the Compact for Safe Cosmetics.  In 2009 and 2010 Maria Shriver recognized Keys by requesting our products in the speakers gift bags at her California Women’s Conference.  This was a very big deal to us.  Our safe ranking on the Skin Deep report assured consumers of our integrity.  Now achieving Champion status from the Campaign for Safe Cosmetics sends a clear message to consumers and to the industry that Natural and safer personal care products is a Better Choice!

Bob Root, Keys CTO and author of Chemical-Free Skin Health® offered to the press, “Just about 60 years ago, almost 100% of personal care products were natural.  Now almost all are synthetic.  The evidence is just too massive that many skin disorders are misdiagnosed and are actually caused by chemicals in everyday personal care, laundry and cosmetic products.  It is time for a change back to pure wholesome products where the concern is for the people first.  People have shown time after time that they support companies with integrity who care first about them.”

Keys is a Chemical-Free Skin Health® company designing and marketing products that solve problems and make people feel good.  Keys products are ranked among the safest by the Environmental Working Group Skin Deep database cataloging over 69,000 products based on safety.  Keys is an early adopter and signer of the Compact for Safe Cosmetics and is fully compliant to all of its standards earning it the status of Safe Cosmetics Champion.  The company’s fundamental purpose is the safety of its customers and educating consumers offering alternative products that outperform chemical laden conventional products. Keys natural products have been featured in motion pictures, television shows and commercials as well as worn by notable celebrities who also seek safer alternatives in their lives and work. Keys CTO, Bob Root, has designed all Keys products and is the author of “Chemical-Free Skin Health” introduced at the California Women’s Conference in Long Beach in 2010.  His book is now in its 4th printing.  Keys began designing products in 2002.  The company is a subsidiary of Orion International Inc., a Wyoming closely held corporation. It sells products worldwide directly to consumers and through retailers who are “trusted advisors” to their community.  Keys does not sell through mass marketers like Whole Foods, Wal-Mart or other commodity resellers.